The film Workers Leaving The Lumière Factory In Lyon (La Sortie des Usines Lumière à Lyon, 1895) by the brothers Louis and Auguste Lumière is 45 seconds long and shows the, approximately, 100 workers at a factory for photographic goods in Lyon-Montplaisir leaving through two gates and exiting the frame to both sides. The first camera in the history of cinema was pointed at a factory, but a century later it can be said that film is hardly drawn to the factory and is even repelled by it. Films about work or workers have not become one of the main genres, and the space in front of the factory has remained on the sidelines. Over the last century virtually none of the communication which took place in factories, whether through words, glances, or gestures, was recorded on film. In 1895, the Lumières’ camera was pointed at the factory gates; it is a precursor of today’s many surveillance cameras which automatically and blindly produce an infinite number of pictures in order to safeguard ownership of property. A new archive system is thus on its way, a future library for moving images, in which one can search for and retrieve elements of pictures.

In the Lumière film of 1895 it is possible to discover that the workers were assembled behind the gates and surged out at the camera operator’s command. Before the film direction stepped in to condense the subject, it was the industrial order which synchronized the lives of the many individuals. They were released from this regulation at a particular point in time, contained in the process by the factory gates as in a frame. The Lumières’ camera did not have a viewfinder, so they could not be certain of the view depicted; the gates provide a perception of framing which leaves no room for doubt. In the Lumière film about leaving the factory, the building or area is a container, full at the beginning and emptied at the end (first example of space off the screen). This satisfies the desire of the eye, which itself can be based on other desires. In the first film, the aim was to represent motion and thus to illustrate the possibility of representing movement. (Harun Farocki)

The problem comes afterwards, because after the first film, there is a second film, again workers leaving a factory made by the same Brothers Lumière. It is here that things deteriorate, go awry, become complicated, because the Lumières were not very happy with the appearance of the workers coming out of their factory (it was their own factory), they said to the workers: ‘Try to be a bit more natural.’ They managed the workers. So the first gesture was lost, this first act of love – it’s an act of love but also of criticism – is very powerful, like a first gaze is very powerful. So they managed the workers, they said: ‘You, go left, don’t go to the right … you, you can smile a bit, and you too … you, go with your wife over there …’ And so there was mise en scène. Thus, fiction was born, because the boss gave orders to an employee, to a worker. That was it, the first script. (Pedro Costa)

We must understand the importance of returning to the purity of the first gaze, and an unreconciled search to find transcendent, enduring meaning behind the transitory, quotidian images. The basis for the chief stylistics of cinema was given in the first film sequence. Signs and symbols are not brought into the world, but taken from reality. It is as though the world itself wanted to tell us something. 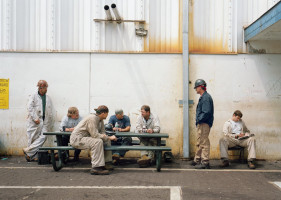 Today, Serbian filmmaker and Film researcher Vladimir Sojat spoke at Malmö University under the title “working class on film.” The lecture was very interesting and brought a lot of thoughts in me.

Sojat began his lecture by stating that the first film ever shown – “The workers leaving the Lumière factory in Lyon” – described the right of workers to leave a factory. Right from the very beginning he characterized the cinematic representation of the working class as a movement away from the sphere of production. This of course has its reasons. As Marx pointed out in Capital, there is usually a “no admittance to unauthorized persons” sign on the factory gates. And it obviously makes it difficult to film there. But in a studio, it should surely be easier…

I would argue that Marx’s description of the sign on the factory gate is a metaphor. What is happening in production is not unknown. However, it is an ideological prohibition. Reproduction of capitalist production conditions requires simply that – what really happens in production – the exploitation of the working class – is kept secret. Therefore, the dominant aesthetic ideologies point out that production is not a legitimate object of aesthetic design. The result is (mostly) in simplified depiction in films of an ambition to direct a gaze towards the place where the classes constituted.